Talking from a traditional Chinese painting of a beautiful lady 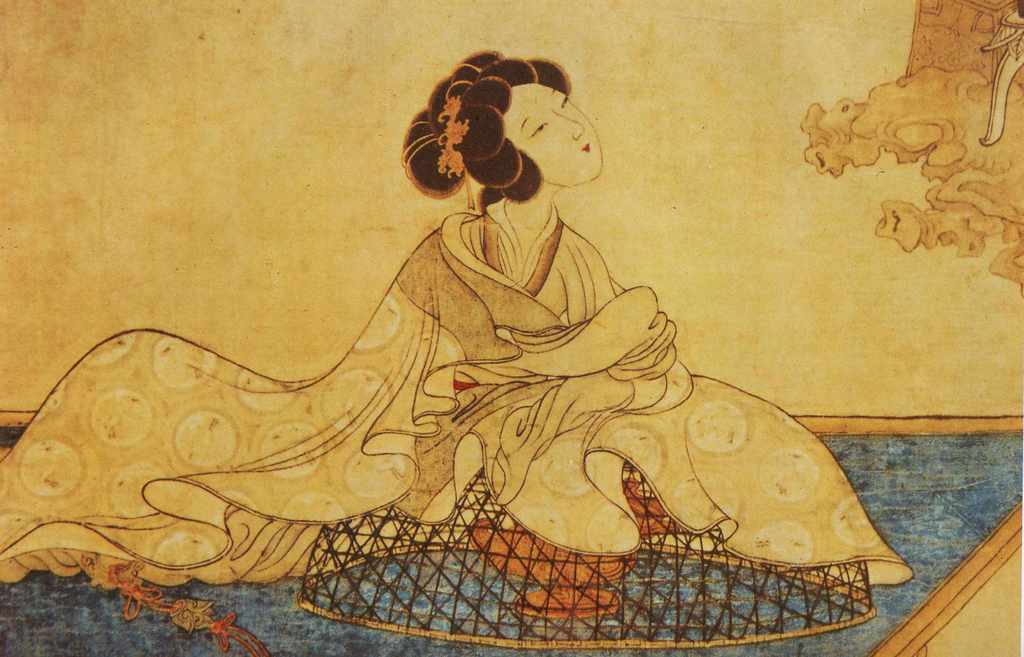 From the painting we can see an elegant lady who was reclining on a fragrant censer and she allowed her imagination to roam at large. We could not know what is in her mind via the visual information, but the overall linear construction is so fluent that while viewing it, we are as if seeing the floating clouds and flowing water unrolling their gracefulness in nature and maybe it implies her tranquil mind. The reposing figure is stable with the triangular composition,but at the same time as light as though it were waving in the space with a fluid rhythm. This subtle blend of serenity and vigor,of firmness and disembodied freedom ,maybe described as the particular configuration of the comfortable,cozy ambient and the sweet-natured femininity being coherent and let us fall under the charm of easiness and carefree. This is a master piece by the late Ming artist Chan Hong Shou.

It is common notion of many Chinese gifted men of letters to seek bosom friends in the brothels at that time. They would rather keep company with the straightforward female entertainers in the brothels than associate with the hypocrite guardians of morality. Moreover many fair ladies were of great versatility but they missed their ways and became prostitutes. The talented gentlemen’s efforts of working their ways up to the offical careers were set back by the repeated falls in the competitive examinations. Therefore the geishas and the dejected literatus were fellow sufferers having mutual sympaty. Chan Hong Shou shared this common notion as he was one of the frustrated geniuses.
The age-old intimate relationship of geisha and literati enhanced the deep understanding of both sexes. In the late Tang Dynasty, and Five Dynasty many frustrtrated literatus gave free rein to their thoughts and feelings in composing songs to the geishas to sing, and it is a unique fascinating, enchanting form of classical poetry.By reading the poetry, the ability to show every consideration to female seemed to be natural of the opposite gender. Many gentlemen could use the manner of the first person to describe the deep feelings and sentiments of the women.

In the Five Dynstry, Mister Qiu, honoured with high official title, wrote a poetry named ”pouring out the heartfelt emotion” of a deserted lady’s train of through:” Where is the heartless man who has left me in this early hours? Without tidings. A closed-door boudoir. Frowning. The moon is descending.
How can you not wanting to find me? Have to stay in the quilt alone. Exchange our hearts. Then you would know how deep is my yearning.” A truly great man could conceive the resentment of the abandoned infatuated lover of her emotional conflicts between hatred and concern. We could feel the intense grinding pain of fascination with hopeless devotion. Being a pretigious man, Mister Qiu descended to wrote the pathos of the Boudoir. Nevertheless, it is one of the characteristics of Chinese literature.

The relationship between literatus and prostitutes were not restricted within the sexual appeal, as there were spiritual communications between them. In Ming Dynasty, the famous courtesans Miss Yue and Miss Ma had talents for composing poems and creating painting, and the gentlemen of refined tastes admired that they were both gifted and glamorous. Therefore the ladies’ works were touched up by the gentlemen and the standard of their works could be upgraded. At that time, their paintings were extolled in the intellectual circles and are valued at a certain price today.

If the relationship of the two genders are linked by hearts, such unison would be much more long-lasting, much more coherent. The western femalebeauty is too directly exposed, too forthright. The extreme aesthetic form is the female nude bodies in western culture ; in consequence of the full exposure of the body with such qualities as lifelikeness, sensuousness, as a person of flesh and blood, passionate impulse would give rise to the allure of sensuality. In late nineteenth century, many art forms were named “Salome”, including drawing, watercolor,oil painting and sculpture. The subject matter in the variety of works of art is a coquettish woman and a man’s head which sometimes is placed in a dish,sometimes is suspending in mid-air while sometimes the head is hung on the evil woman’s fingers .”Salome” is an ancient legend of the Hellenistic period, and it is strange that in the late nineteenth century European art and literature showed intense favouritism towards this story and diverse aspects of this theme are developed in further formal inventions. No matter what forms of art they are, the inevitable tragedy is the motif. In a certain sense men are easily bogged down by the bewitching charm, for the caltivated spirit just could not extricate itself, and the aftermath could be devastating.

Venus is a paragon of beauty that at first glance offer greatly pretty impression displayed in a proportional,harmonic manner. Such faultless goddess beauty of human shape has become an object of reiterant worship by many worldly artists. However when the holy love turned into the secular love , vexation would occure. The entanglements of sacred love and profane desire,the withheld but promised femininity are the dualistic values which put the mortality in the dilemma, and being the perpetual theme in the works of art, the visual matter with its connotations strikingly demonstrated the intened expression.

A sixteenth-century painting named “The Gorgeous Show” represents a well-rounded naked goddess Venus who is bestowed with the sweet kisses and heartly laughter by the Cupid and the junior Cupid.
Nevertheless, one of her hand is holding an arrow of love,another hand the forbidden fruit; and within the two-dimensional world of the picture we discover the mask associating with hypocrisy, the snake as symbol of scourge. In the background are the faces of jealousy and suffering; the glaring sight is the predestinator stretching out his strong arms above the goddess gazing her with angry eyes. The vacillation between the earthy lust and the holy love is real torture in life and it has been the ideology being reflected in Western culture.

Fictitiousness and some certain sense of apathy would enable us to detach ourselves from some practical sense of our physological need and then the pure appreciation could be evoked. This is perhaps most helpful of analyzing some detail in a work and the abstract pattern organizing the visual matter in such a way could convey to the eyes with all its essential aspects. Therefore, in during with the female beauty, Chinese arts make use of a kind of stylized,simbolized idiosyncrasy to express a pretty lady. A depicting image of a woman with mouth as small as a cherry, phoenix eyes with single eyelids is the expression of female beauty. The lady’s body is covered with the undulating vividness of the swinging curved lines. The beautiful linear configuration not only holds back the sensual associations, but it lso let us find out that the feminine distinguishing characteristics of delicacy and gracefulness is the virtual aesthetic value. “The Beautiful Lady”,painted by Chan Hong Shou really is a vivid, lively young woman of charm. The elegant and quiet fair-skinned face is so delicate which is the traditional Chinese literary gentlemen use their poetic sensation to capture the feminine engaging demeanor. This kind of natural beauty could not be find in the circle of the pious men.

Only in the case of keeping a distance from reality, we can completely be in the appreciative frame of mind, If we do not keep distance from the reality, destruction could happen. A tragedy happened long time ago.An audience went up to the stage and stabbed an actor who played the role of a cunning scoundrel. The audience was captivated by the consummate acting and did not have the ability to step back to appreciate the brilliant acting.He had not cultivated the proper attitude towards arts.

The visual interpretation of the curved line with the characteristics of veiled passion analogizes with the sentimentally attached classical poetry as they underscore the pregancy of poetry. So smoothly are the graceful curves blended into a whole of great overall rhythm, so delicately is the construction of the beautiful lady, that we seem to see simple nature at the same time that we marvel at the skill and mastery of the artist. Of course the agitations originated from the relationship of the opposite genders are left behind.