Kolkata formerly Calcutta is a city shrouded in time warp basking in its earlier glory as the former capital of the country. Established in 1690, the city has ben immortalized time and again over the past three centuries, through art and litrature. Artists and photographers and writers have often embarked on a journey to reveal the mysteries of Calcutta. Many an adjective has been used to capture the essence of the city. Some romanticize the idea of Calcutta calling it,’Jewel of the East’, ‘ City of Joy’, ‘Cultural Capital of India’, while others present a murkier side of the city calling it the ‘Black Hole’, Graveyard of the British Empire’. The city has been witness to major world events which changed the course of history

As part of the British Empire during the Second World War, India found itself in the position of a de-facto ally to Britain’s Western allies, including the United Stated of America. In the years 1942-44 during World War II, Japanese fighter planes bombed Calcutta trying to destroy the crucial Howrah Bridge as well as operations at the sea port.

India was a major aerial supply route, for an American military mission that came to be known as ‘flying over the Hump’, a term of reference for flying over the Indian Himalayas. Though extremely dangerous (several U.S. planes had crashed on the mission), it was the only way for the allies to send supplies to China in support of its war against Japan, while avoiding Japanese occupied Burma.

The eastern Indian state of Calcutta (now Kolkata), because of its proximity to China and Burma, was as an important hub in execution of the military operations. In fact, the Red Road in Calcutta had even been used an emergency runway for operation Hump. The India China Burma theater was responsible for bringing in US military to Calcutta during WWII.  Calcutta had caught the imagination of many GI’s residing in this city during this period. It was during this time that the US military photographer  Clyde Waddell took photographs of the city from 1943- 1945. Rarely has Calcutta been presented as a city of contradictions, a unique paradox of extremes, of gradoise and luxury, poverty and wealth coexisting harmoniously as he presented the city in his album.

Aakriti Art Gallery Kolkata is hosting the exhibition ‘A Yank’s Memories of Calcutta and Memorabilia’ till 24 January’2015. The exhibition attempts to take you through a walk in time to re- experience Calcutta during WWII. Music by legends of that era like Judy Garland, Bing Crosby, Frank Sinatra would be playing in the background in an attempt to recreate the 1940’s. The objects and collectibles exhibited include a portable typewriter, cameras, medals, ink wells, advertisement boards, radio set etc which serve as memorabilia. Original clippings of that period are being screened which documents Calcutta during the War years. You can view the exhibition online on http://www.aakritiartgallery.com/exhibition/details/15 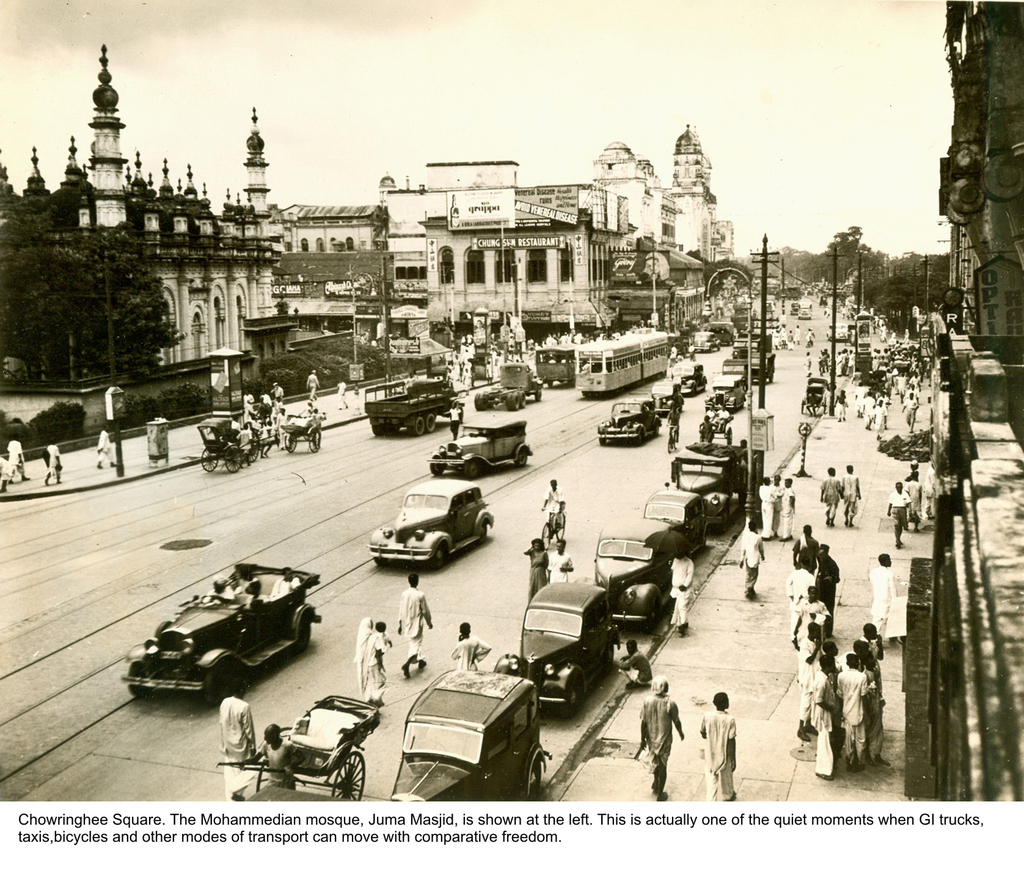 A Yank’s Memories of Calcutta’ by Clyde Waddell

The calculating eye of photographer Clyde Waddell captured the eccentricities of the city in the early twentieth century. Waddell, was Chief Photographer for the Huston Press before entering the army, was flown to the India-Burma Theater, the south east Asian front of the allied forces during World War II, in November 1943 and attached to the Public Relations Staff of Southeast Asia Command with the express purpose of acting as personal press photographer for Supreme Commander Admiral Lord Luis Mountbatten.

He took these pictures primarily at the behest of many friends who had been constantly asking him for photos of Calcutta scenes. By the time he completed this project, which brought him into some of the remotest out of bound areas (and even on top of Calcutta’s Howrah Bridge), he was flooded with requests from Americans and Britishers for copies of his photographs. The photographs reveal the bewilderment of Clyde Wadell in experiencing the clash of the east and the west, which he experienced in the city. The descriptions often exoticize Indian traditions, presenting them as idiocyncracies of the East. The works are an interesting study of how the East is presented from the eyes of a Westerner.

After the defeat of the Japanese by IV Corps and XXXIII Corps in Assam, the monsoon intervened before many counterattacks could take place. After the enforced period of reduced operations, the Third TAF supported the advance of Fourteenth Army against the Japanese Forces. However, command arrangement changes at the end of 1944 cutting short the life of the third Taf. It was redesignated HQ RAF Bengal and Burma on December 1944.

The ‘ Phoenix’ was an Allied Magazine which was published for all Allied Forces in South East Asia Command. These were published for the Supreme Allied Commander SEA in Calcutta, India. These magazines measure 14’’X 10”. Clyde Waddell, creator of the album,’ A Yank’s Memories of Calcutta’ worked as a news photographer for Phoenix Magazine from 1945 onward.

LIFE was an American magazine that ran weekly from 1883 to 1972, published initially as a humor and general interest magazine. Time founder Henry Luce bought the magazine in 1936, solely so that he could acquire the rights to its name, and shifted it to a role as a weekly news magazine with a strong emphasis on photojournalism.

The 1940s marked a major change in world history. Flipping through the pages of LIFE magazine from 1940 to 1949 would be like watching the world transform. The magazine is a treasure trove of information for World War II enthusiasts chronicling the war years and also portraying the popular culture of thet time.

The Statesman is an English Language Daily, established since1875, is one of India’s oldes newspaper which is still in print. With headquartes in Kolkata , this newspaper has been instrumental in broadcasting key events for over a century.

This particular copy chronicles the death of the 32nd President of the United States of America, Franklin D. Roosevelt. Other headlines of this particular issue include ‘Patron’s Troops enter Jena.

Henry Lorraine was the Flight Mechanic 1371854 LAC Fitter II Airframe of the India-Burma Theater during World War II. The following photographs cover Henry’s service in India with 215 squadron from 1942-1945.

Included in the booklet are birth certificate, Christmas messages sent home,photographs of planes which he serviced in, and daily life scenes during his stay in India and other formal documents of  Henry Lorraine.

Collectibles and WWII memoribilia in Calcutta

Original Clippings of Calcutta during WWII

This clipping chronicles how the GI’s received newspapers which were dropped from airplanes. It is an interesting account of the role newspapers played in War Years

This clipping chronicles the China Burma India Theater of WWII. China Burma India Theater (CBI) was an umbrella term, used by the United States military during World War IIf or the China and Southeast Asian or India-Burma (IBT) theaters. Operational command of Allied forces (including US forces) in the CBI was officially the responsibility of the Supreme Commanders for South East Asia or China. However: US forces in practice were usually overseen by General Joseph Stilwell, the Deputy Allied Commander in China; the term "CBI" was significant in logistical, material and personnel matters; it was and is commonly used within the US for these theaters. The China India Burma Theater was a large-scale operation, but one that’s often overlooked in accounts of the war.

This clipping allows the viewer to relive the experiences of WWII Army Veteran Joe "J.J." O'Brien as he shares his memories and photos of being drafted into the Army and deploying to this often unsung theater. 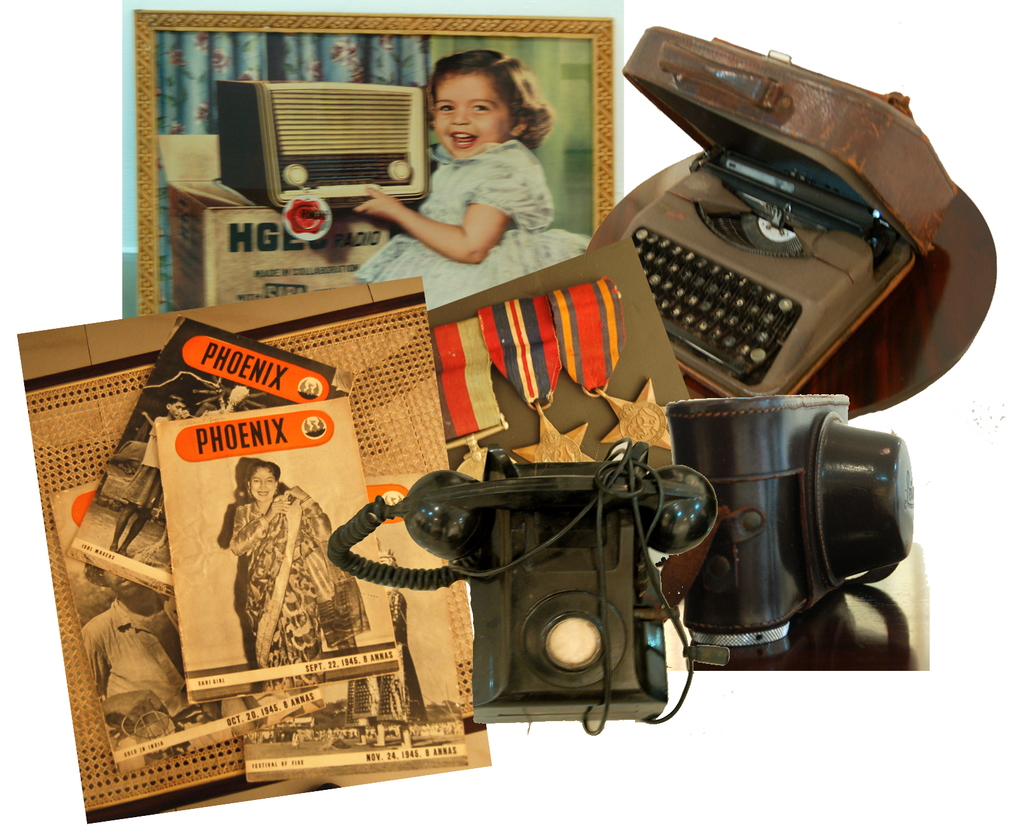