Art is a common language shared with no geographical limit. I love sculpture and would like to share with everybody in the world who love sculpture too. ---Chen Wenling Chen Wenling is well known for his highly distinctive sculptures which often feature a pig or other animal personified to form a grotesque commentary on modern consumerist society. His style is raw and to some even repulsive, fullness of form assumes a special kind of strength. Countless shapes come together irrationally, forcing the viewer to fall into an unaccountable rapture. In Chen Wenling’s idea, the very “unacceptability” of his works is its strength. His sculptures are powered to enchant the viewer, negatively or positively. 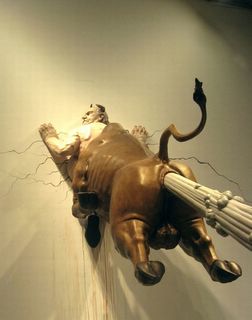 He was born in 1969 in Anxi, Fujian China and studied at the Xiamen Academy of Art and Design, and at the Central Academy of Fine Arts in Beijing.  He is now living and working in Xiamen, Fujian Province of China and Beijing as a professional artist.It is well known that the visual arts of late twentieth century, whether in art, movie and three-dimension cartoon pictures of computer games, violent, dubious and full of self-pity. Chen’s works are trials to allow his art, in becoming a window to the construct of human nature rather than its critique. His works attracted outsiders, insiders, academics and avant-garde critics alike, to appreciate them from their own perspectives. Chen Wenling is an artist of secularism, and at the same time he used a humorous and exaggerative way to show the themes of his works. From the recent works of Chen Wenling, we could see some traces that he learn from western world.

Modern art emphasizes the concepts in a piece of work. It often creates a style of too many concepts, making viewers tired. In contrast, Chen’s works are simple and true. He does not deliberately create concepts. His works serves as the naked bodies have nothing to disguise themselves. What left is a direct communication with the nature and a direct conversation between the society and the people. The facial and body expressions are properly exaggerated to enhance the communicative effects. It can also be viewed that there is a concept in the works to curtail the burden of concepts. His amazing sculpture installation depicts, among other things, Wall Street's golden bull impaling a horned Bernard Madoff, ,biggest con man of all time, in the rear . 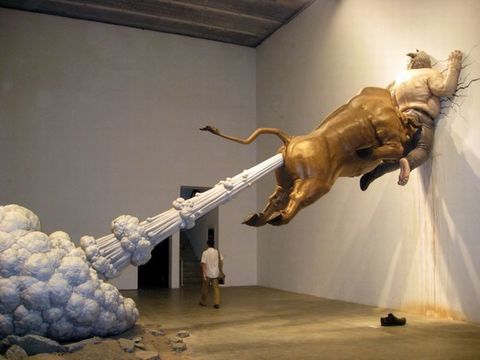 Bernard Madoff is a former American stockbroker, businessman, investor, investment advisor, money manager, and former non-executive chairman of the NASDAQ stock market, and the admitted operator of the largest Ponzi scheme in history. The work apparently says that all Wall Street bulls are powered by hot air. The huge cloud coming out of the bull's rear not only refers to the end of a greedy era, but also symbolizes the danger of the bubbles of illusion in financial markets. In a society based on desire and money, some people choose to create many false impressions, while others sadly fall for them. Some sources name this sculpture as “What You see Might Not Be Real”.