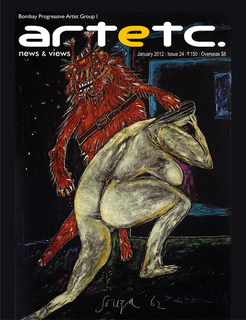 Welcome dear reader to the New Year, with yet another new thought from the editorial desk of artetc. news & views. After the enthusiastic response with which you had accepted our last two issues on Cutting Edge Art Practices in India, we thought it would be a refreshing diversion to take a close look at some of India’s most successful Modern Masters.

Coincidentally, most of them emerged from what is now known to be one of the most successful art movements in the country—namely the Bombay Progressive Artists Group. Right from the highest auction record holder in Indian art—S H Raza, to the most well-known faces of Indian modern masters, F N Souza and M F Husain, to Tyeb Mehta, they have all been a part of this movement either as founding fathers or joining later. Incidentally, the Bombay Progressive Artists Group was formed in the same year that India gained her Independence, and as if by natural progression, it was the members of this group that brought the typical modern Indian identity to the erstwhile heavily Western inspired or folk/tradition dominated artistic expressions that was the mainstay of art emerging out of the Indian subcontinent. Souza’s expressionist style, Husain’s pop-art leanings and Raza’s abstractions set the tone of how modern Indian artistic expressions will address and communicate with the rest of the world, while keeping their originality intact and rooted to the country and ethos of their origin.

The Bombay Progressives were thus an important group of artists in modern India, and naturally we have decided to look at them over the stretch of two subsequent issues—this one and the next. In the January issue we examine those who started it all—Raza, Souza, Husain, Ara, Gade and Bakre—their styles, their life as well as their market demands in the context of the auction floors the world over.

We are really thankful to Prof. Ratan Parimoo who has kindly consented to being the guest editor. We also extend our thanks to Dr Manisha Patil, Dr Nalini Bhagwat, Dr Nuzhat Kazmi, Haimanti Dutta Ray, Snehal Tambulwadikar and to the guest editor himself for agreeing to and taking time out of their busy schedules to contribute to this issue.

An added attraction is the series of letters from Souza sent to Vinod Bhardwaj which are published for the first time together in this issue.

Please write to us and let us know of your reactions to this effort of ours, as you have always done. Wish you a very happy New Year.